Fundamentally Ethereum has had a solid year. Granted, development has been a little delayed with certain aspects but it is the largest dApp and smart contract platform in the world so this is to be expected. Another hard fork is due in less than two weeks, but will ETH prices finally react?Ethereum Dumps AgainCrypto markets have taken another hit today and as usual Ethereum has taken more punches than the rest. According to Tradingview.com ETH has slid from $135 back into the $125 region in a 6.5% decline. 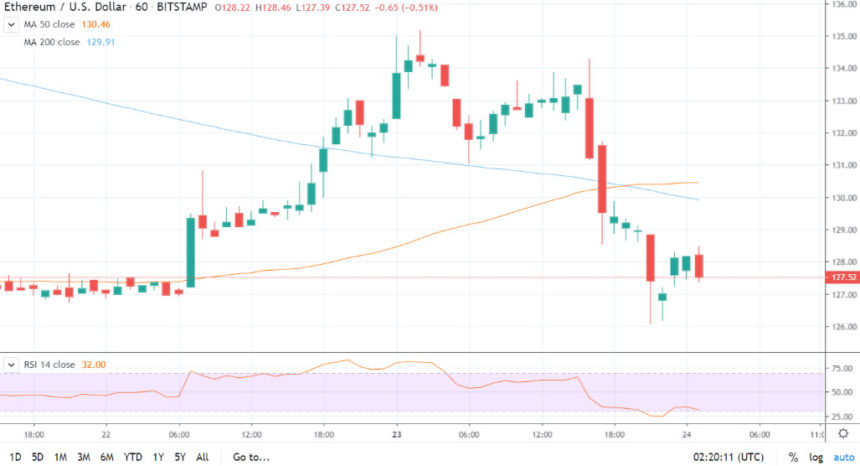 The move has mirrored Bitcoin’s failure to break resistance and sent Ethereum back towards its nine month low. The new level of resistance at $135 has been too much for ETH bulls to overcome and the crypto asset is looking to end the year lower than it began.Ethereum has taken the biggest hit in the top ten in what could be a final capitulation in what has been a two year bear market.There has been a lot of FUD and tribalism on crypto twitter towards Ethereum, largely because it has underperformed massively this year.Delays in ETH 2.0 have also caused rival platform supporters to wield their digital spears but putting things into context was one protocol specialist who commented;“It took Apple 2.5 years to add Copy+Paste functionality to the iPhone. Think about that before complaining about how long ETH2 is taking.”Difficulty Bomb AdjustmentThe second hard fork in less than a month has also raised some eyebrows among the Ethereum detractors.The Muir Glacier upgrade, scheduled on January 2 or block 9200000, deals with the Ethereum difficulty bomb or Ice Age. This has been coded into the proof of work algorithm in order to maintain an average block time by adjusting the difficulty over time.As the platform has grown in terms of active users and decentralized applications, it has been deemed necessary to bring this adjustment forward to prevent the network slowing down in what is termed the Ethereum Ice Age.It is a routine upgrade but many have wondered why it was not included in Istanbul. Muir Glacier will delay the difficulty bomb for another 4 million blocks, or approximately 600 days, through EIP 2384.Unlike Constantinople earlier this year there will be no planned block reward adjustments and it will remain at 2 ETH for now. However a Reddit poll suggested that some members of the community were for a block reward drop to 1 ETH.The transition to proof of stake later next year will render these PoW adjustments obsolete. Looking at the current state of prices, things are unlikely to turn around for ETH until its big brother starts its own halving rally next year.Image from Shutterstock

Why Ethereum’s Privacy Matters and What’s Being Built to Support It
Decentralizing Popular Dapps Isn't Just a Scaling Problem
Stablecoins Flip ETH Volume, DeFi the Primary Motor
Ethereum Is Diving, But It’s Too Early to Say Bulls Have Given Up