Bitcoin has evolved over the course of the decade. From what was once called imaginary Internet money at the onset, Bitcoin today has positioned itself as a leading digital asset that even traditional financial institutions are taking seriously.

In fact, according to CoinMarketCap, Bitcoin dominates the crypto-space with a gargantuan market cap of over $159 billion, followed by Ethereum that has a market cap of $24 billion. The debates between these two communities have been extremely polarising and highlight different priorities and worldviews in the crypto-space.

Bitcoin and open-blockchain expert, Andreas Antonopoulos, weighed in on the Bitcoin v. Ethereum debate on the latest episode of the POV Crypto Podcast. The conversation focused on which of the two currencies is better suited to become the backbone of finance in the world. While Bitcoin has seen countless spinoffs over the years, Antonopoulos highlighted how in the evolution of every cryptocurrency, certain decisions representing trade-offs need to be made. He went on to add, “Eventually they will diverge and they’ll diverge by necessity because they will make choices to optimize one direction instead of another. And maybe another system optimizes the other way.”

According to Antonopoulos, the most fundamental trade-off between Bitcoin and Ethereum is between security and flexibility. He elaborated,

“Bitcoin scripting language is restricted in many ways – to be very simple, to be Turing – incomplete on purpose, which is hard to achieve and to expose a very small attack surface”

As an outcome of such an approach, Antonopoulos remarked,

Regarding Ethereum’s approach, Antonopoulos indicated that Ethereum has chosen to go the opposite way. According to him, the flexibility that the Ethereum platform offers results in “incredibly complex systems where there are all kinds of unintended side effects and where in order to reach maturity, security, robustness, stability, you have to go through a lot more iterations.”

He went on to add that presently, Ethereum is designed to create a fairly easy-to-use form of currency, whereas Bitcoin leans towards a store of value.

The transition from Proof of Work to Proof of Stake has been a major talking point for the Ethereum community. Regarding the transition, Antonopoulos remarked that PoS is better suited for the applications Ethereum is trying to run. However, “part of the reason that Ethereum gets to do PoS is because it has as its big brother – Bitcoin, that provides a source of stable, probably available liquidity and access to markets that is so uncensorable and so difficult to interfere with that that gives Ethereum the ability to do other things more flexibly.”

According to market data from skew, since the beginning of 2020, Ether’s price as a percentage of Bitcoin has been on the rise, increasing from 1.8 percent to 2.7 percent. 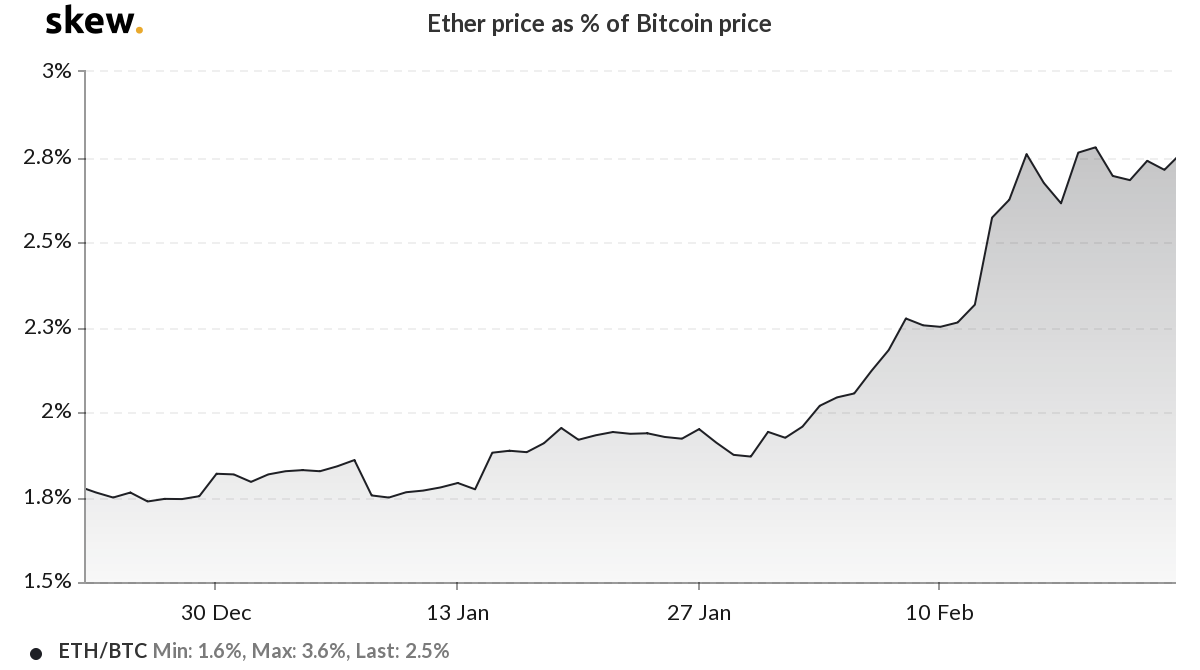 While Bitcoin continues to be the dominant coin, the Ethereum-powered ecosystem may provide significant competition to the king coin in the future.

How the Coming Constantinople Hard Fork Could Stir Up Ether Markets
Bitcoin Futures depict growing investor confidence, despite market corrections
RIP ICOs: 2019 Will Be the Year of Enterprise Blockchain Tokens
Is Bitcoin walking a tightrope between scalability and centralization?