Ethereum, the second-largest cryptocurrency by market capitalization, plunged by a massive 35 percent on Thursday, logging its biggest decline in a day since the 2018 ICO bust.The ETH-to-dollar exchange rate fell from $195.64 to $126.28 in 30 minutes, following the leading cryptocurrency Bitcoin’s frenetic sell-off within the same timeframe. The implosive move downhill led Ethereum’s market capitalization to a fresh year-to-date low of circa $14.98 billion. At its highest, it was $27.37 billion. 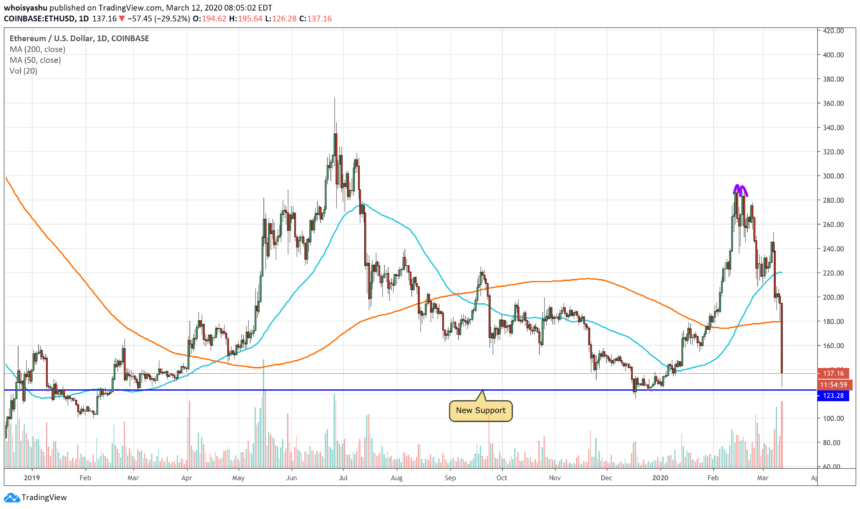 ETH/USD pulls back mildly after crashing 35 percent | Source: TradingView.comElsewhere in the crypto market, all the high- and small-cap coins suffered major losses. Bitcoin, as stated, tanked massively by 23.48 percent. At the same time, Ripple’s XRP, Litecoin’s LTC, Bitcoin Cash’s BCH, and other top cryptocurrencies too plunged within a range of 25 to 40 percent, erasing about $68.61 billion in total from the overall market.The Trump DumpThe crypto market’s crash came a day after President Donald Trump announced travel restrictions from most of the European countries to offset the rising number of novel Coronavirus (COVID-19) in the US. Trump also promised monetary aids to assist small businesses but that didn’t translate into recovery for an already-suffering stock market.Bitcoin, Ethereum and the rest of the cryptocurrency tokens were following the global equity trend closely. All of the top coins underwent huge declines as investors arguably sold them to cover losses in traditional markets. Even gold, which is considered a safe-haven in times of global crisis, failed to register a price rally and fell alongside equities and bond yields.Global margin call. All correlations go to 1. Note that gold, the metal is within 5% of its recent high. Remain calm. What do you want to own when the margin call ends? My bet crash today (SPX down 20%). Follow thru a few days. FED response, face ripping rally. Gold wins.— Lawrence Lepard (@LawrenceLepard) March 12, 2020
Jeremy Gardner, an investor associated with San Francisco-based Ausum Ventures, compared bitcoin’s tragic crash to Gold’s during the 2008 financial crisis. The prominent analyst noted that the cryptocurrency’s true litmus test as a safe-haven asset is after the crisis, stating:“If bitcoin rebounds like gold after ‘08, a compelling argument begins to take hold.”Everyone is joking “so much for bitcoin being a safe haven,” but what matters more than its immediate response in a financial crisis is how it responds thereafter.If bitcoin rebounds like gold after ‘08, a compelling argument begins to take hold.This the first big test.— Jeremy Gardner (@Disruptepreneur) March 12, 2020
Ethereum, whose correlation with bitcoin remains the highest, could also take bullish cues from the latter’s recovery. But for that to happen, the Coronavirus pandemic has to get over. People need fiat to buy utilities more than anything else should they feel the need to quarantine themselves in their homes.The new virus so far has killed at least 4,700 people and has infected 126,000 others around the globe. In response, most-affected countries like Italy have locked down about 60 million of its citizens inside their homes. In the US, the pandemic is spreading at a faster rate, with now more than 1,000 confirmed cases.What’s Next for Ethereum?Etheruem and the likewise cryptocurrencies have joined the ranks of other risk-on assets. The second-largest token could feel further bearish pressure as investors’ demand for fiat liquidity surges, sighting 2018’s bottom area for its next potential pullback. 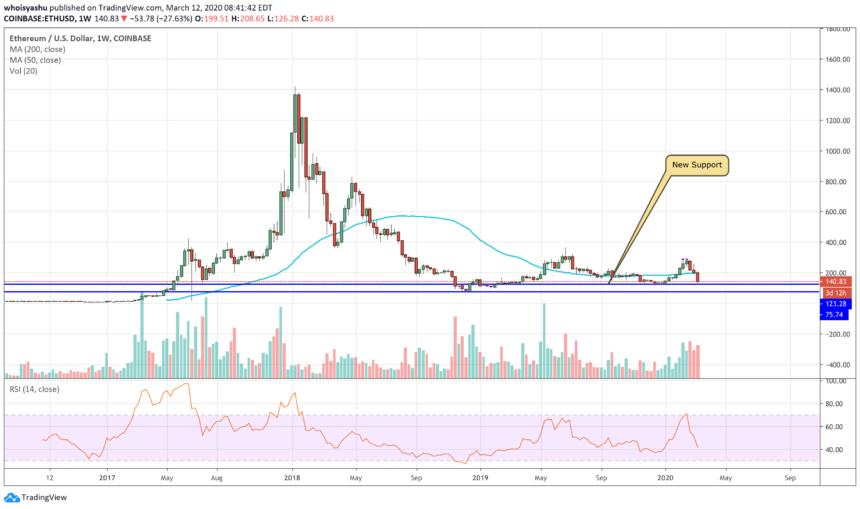 2018 Bottom range in sight | Source: TradingView.com, CoinbaseA plunge below $123 coupled with an escalation in the number of COVID-19 cases could allow investors to unload more Ethereum on the market. Technical support at $75 could protect the cryptocurrency from falling further, but sentiment in times of a global crisis cannot be gauged.The best-case scenario for Ethereum, at the same time, is to pull back from $123-area and retest the 50-week moving average (blued wave) as resistance.