Ethereum has been struggling to garner any momentum as it faces heightened resistance around the mid-$140 region, with this bout of consolidation coming about in tandem with that seen by Bitcoin and most other altcoins.In spite of this, ETH has been able to form a bullish textbook charting pattern that may give it some notable momentum once it breaks through the resistance it is facing around its current price levels.This also comes as the crypto incurs some notable fundamental strength, with one on-chain metric suggesting that ETH is poised to see some serious near-term upside.Ethereum Consolidates Below $145 as Bullish Technical Pattern Emerges At the time of writing, Ethereum is trading down marginally at its current price of $143.70.This is the price at which ETH has been trading at for the past few days, with its rally seen earlier this past week allowing it to climb to highs of $145 before being rejected.Bulls then tested this level again on multiple occasions, with each time resulting in a similar rejection.It is important to note that consolidation directly below resistance can be viewed as a bullish sign, as it often suggests that an upwards breakout is imminent.Another key factor that could bolster Ethereum in the days ahead is the fact that it has formed what appears to be an ascending triangle with an upper boundary existing at just over $145.Josh Olszewicz, a prominent cryptocurrency analyst, pointed out this emerging pattern in a recent tweet, while offering a chart with a target existing at roughly $200.

Image Courtesy of Josh OlszewiczOn-Chain Metrics Also Point to Imminent ETH Upside Growing technical strength isn’t the only thing currently counting in Ethereum’s favor.As NewsBTC reported yesterday, data from analytics platform Glassnode shows that exchanges are currently seeing their highest ETH balance since December of 2016.Exchange balance has proven to be inversely correlated with Ethereum’s price action, which means that the crypto could be well positioned to make a massive upside movement.“Since late 2019, ETH exchange balances have increased by more than 21% to over 18,187,000 – which represents ~16% of Ethereum’s circulating supply. The last time we saw levels this high was in December 2016.” 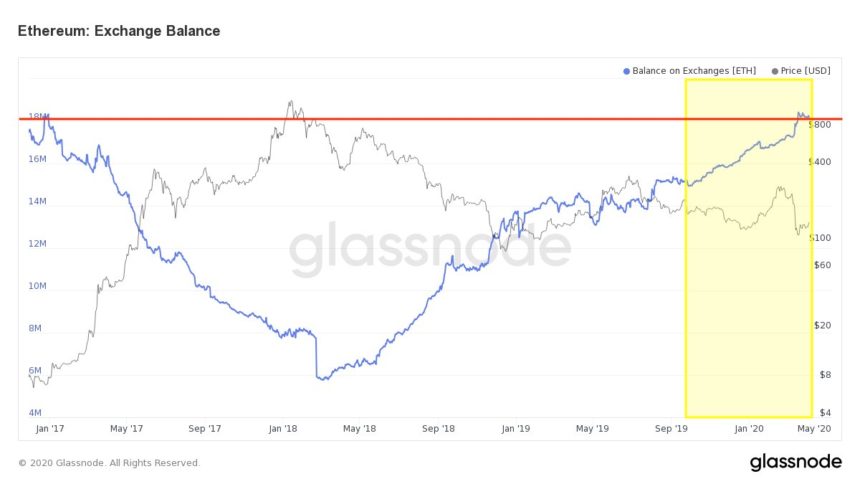 Image Courtesy of GlassnodeIf this inverse correlation continues holding strong, the growth in the balance of Ethereum on exchanges does suggest that the crypto will soon see some massive near-term upside, which could be further bolstered by its technical strength.Featured image from Shutterstock.

It’s “Decision Time” for Ethereum, and Analysts Bet ETH Surges to the Upside
Reddit Co-Founder Ohanian Leads $3.75 Million Round in ‘Hearthstone’ Competitor
Ethereum's Buterin: Proof-of-Stake is finally going to be real
A New Startup Has Zooko and Naval Betting on Better Crypto Contracts