Ethereum could be well positioned to see some notable upside in the days and weeks ahead, despite its overt signs of weakness caused by its recent decline to the sub-$200 region.Analysts are now noting that its market structure still favors buyers so long as it maintains above $185, and that a continued defense of this support could be enough to spark the cryptocurrency’s next major uptrend.One such analyst is even noting that this potential next upswing could lead the cryptocurrency to as high as $290, with this being a critical level due to it being ETH’s current year-to-date high.It is important to keep in mind that Ethereum’s moving averages are still telling a bearish tale when it comes to the crypto’s macro trend, and buyers will have to begin garnering significant strength in order to shift these MAs back into their favor.Ethereum Hovers Around $200 Following Latest SelloffAt the time of writing, Ethereum is trading up 1% at its current price of $200. This marks a notable climb from daily lows of $192 that were set yesterday when the crypto began incurring some downwards momentum.Buyers were able to quickly absorb this selling pressure, however, and subsequently were able to propel ETH back above $200.The crypto is currently trading well below its multi-week highs of over $230, with its decline from these highs leading it to see immense bearishness against its Bitcoin trading pair.Its weakness against BTC has placed some drag on its USD trading pair as well, also causing its moving averages to flash signs of immense macro weakness.One trader recently spoke about this development in a recent tweet, explaining that it is “hard to find any macro bullish argument” for Ethereum due to its moving averages.“ETH: Hard to find any macro bullish argument with HTF MAs looking like this,” he said while pointing to the below chart. 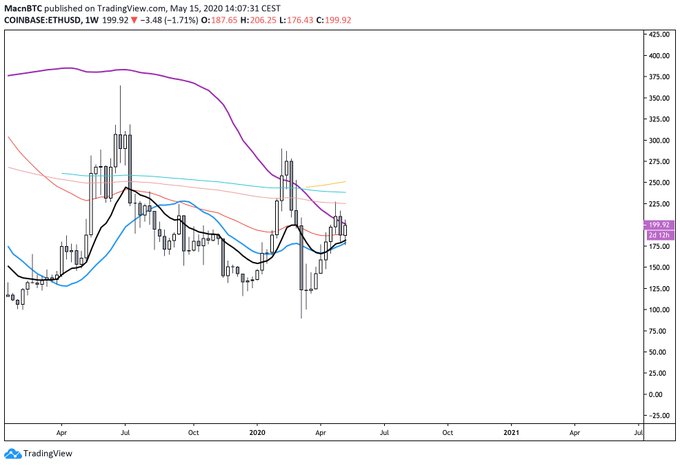 Image Courtesy of MacETH Still Well Positioned to Rally Higher Despite Overt Weakness Another analyst recently explained that he still believes that the cryptocurrency is well positioned to see further upside as long as it trades above $185.He noted that a continued defense of this level could lead the crypto to $250 or even $290.“Ethereum: I’ll take it. As long as we remain above $185 (and even $168-173) I suspect ETH will start pacing up towards the February / March levels. Targets should be $250 / $285-290.” 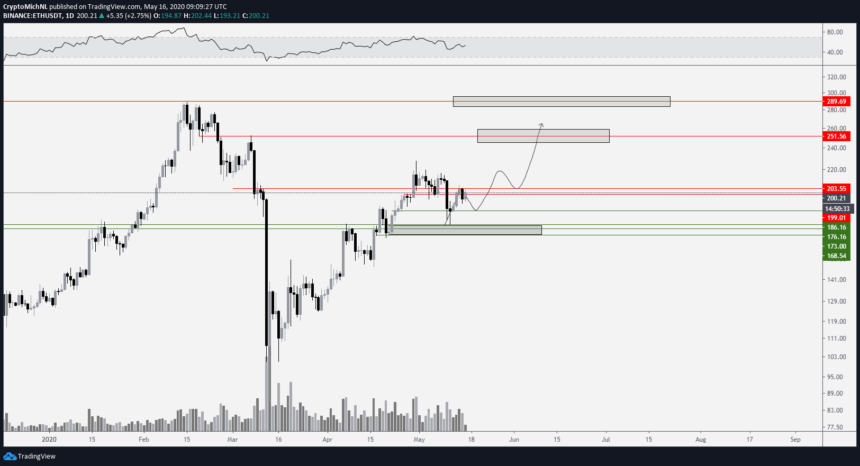 Image Courtesy of Crypto MichaelThe same analyst also went on to further add that Ethereum should be able to incur a solid uptrend as long as it remains above its 100 and 200-day moving averages on its daily chart.“As long as the 100/200-MA on the Daily remain support, the trend should be up and we can expect upwards continuation.”Featured image from Unplash.

Ethereum Makes 3rd Attempt at New Highs as Options Skew Turns Negative
Ethereum Gearing For Another Lift-Off to $250: Rally Isn’t Over Yet
Ethereum won't surge to the tune of every 'positive' change
Understanding the RadicalxChange Movement And Its Cypherpunk Appeal