Another week, another round of Crypto Tidbits.The past seven days have been volatile days for Bitcoin and other cryptocurrencies. The cryptocurrency on June 1st rallied past $10,000 for the first time in many weeks, reaching as high as $10,400.It was an explosive move that had many expecting more upside. One Wall Street analyst went as far as to say that the breakout past $10,000 was the biggest in BTC’s storied history.But just as fast as Bitcoin rallied, the asset tanked. Just 24 hours after the asset moved into the five digits, it plunged by $1,600 in three minutes on BitMEX, falling as low as $8,600 as longs were squeezed out of their positions. 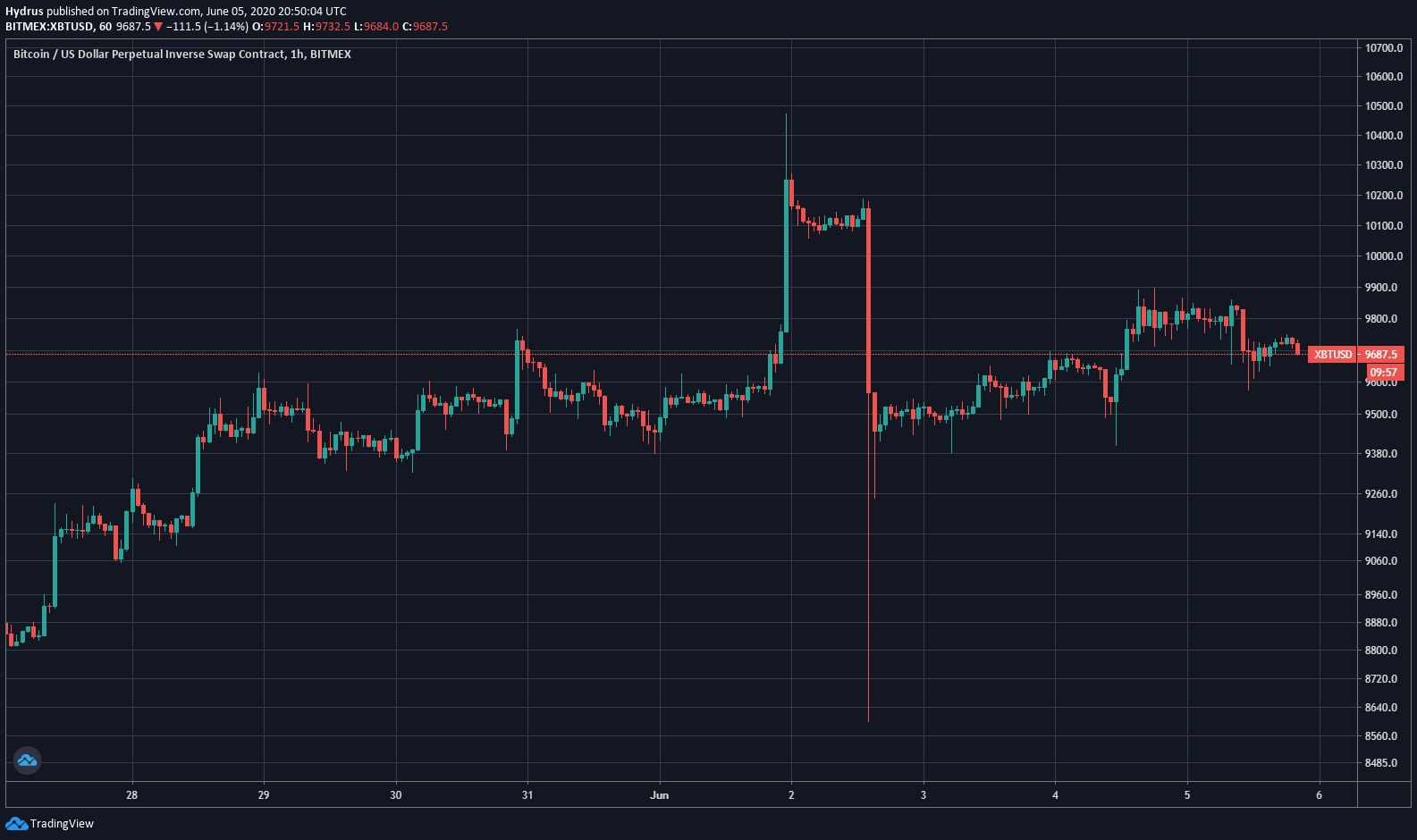 Bitcoin price chart from TradingView.comDue to the two explosive moves — one to the upside and one to the downside — over $200 million worth of derivatives on BitMEX alone were liquidated.Analysts are currently divided as to what to make of this crypto market price action.One prominent technical analyst, John Bollinger, creator of the “Bollinger Bands” indicator, is bearish. He recently wrote that investors in BTC should be cautious at current prices:“The is a Head Fake at the upper Bollinger Band for $btcusd, time to be cautious or short.”Others have been more optimistic. Mike McGlone of Bloomberg’s commodities analysis desk released a report this week on the crypto market.In it, the strategist said that something will need to go “really wrong” for Bitcoin not to rally. McGlone cited a confluence of fundamental factors, like the money printing by central banks, the adoption of futures, the growth of Grayscale Investments, and the block reward halving.Related Reading: Crypto Tidbits: Bitcoin Nears $10k, Goldman Sachs Talks Cryptocurrency, Chinese Yuan SlumpsBitcoin & Crypto TidbitsCrypto Use Case Swells as Trump Goes After Twitter: There’s been a controversy brewing between President Trump and social media platforms like Facebook and Twitter over the past week. Twitter flagged an election-related tweet from the American leader as something that needed to be “fact-checked.” According to Su Zhu of Three Arrows Capital, the ongoing battle between the Administration and these social media companies will help crypto’s “web 3.0” use case:“With the recent politicization of facebook, google, and other bigtech social media giants, the web3 thesis for crypto has never been as underrated as it is now.”Grayscale’s Clients Are Accumulating Bitcoin at a Rapid Pace: According to technology data analyst Kevin Rooke, Grayscale Investments has seen an influx of Bitcoin investment activity over the past few weeks. Rooke found that the crypto investment firm, which services mostly institutional clients, has bought 9,503 Bitcoin in the past week alone. During that same time frame, miners produced 6,863 coins.

Image of Bitcoin accumulation by Grayscale Investments from cryptocurrency and technology data analyst Kevin Rooke (@kerooke on Twitter).Grayscale Sees Mass Ethereum Investment As Well: Grayscale’s other flagship product, the Ethereum Trust (ETHE), has seen a similar frenzy of investment. A top analyst noted that the price of a share of the Trust recently traded as high as $240, which is notable because each share is only backed by 0.094 ETH. That’s to say, the investors purchasing the Grayscale Ethereum Trust on secondary markets were valuing ETH at $230 billion, higher than Bitcoin’s market capitalization of around $175 billion.Ethereum DeFi Could See Slowing Adoption: According to Multicoin Capital’s Kyle Samani, the adoption of DeFi is likely to slow due to clear “latency” issues with Ethereum:“You just can’t build global scale trading systems for lots of users on POW chains. It just doesn’t work. High latency –> all kinds of negative second order effects. So I think for now we are near a plateau for DeFi – measured in ETH terms (not USD) – until the core latency problems are solved.”Fidelity Investments Expects Growing Institutional Adoption: According to a recent study conducted by Fidelity Investments, a $2 trillion asset manager based in the U.S., digital assets will “continue to gain adoption and interest by a variety of institutional investors.” This confirms a report published by the firm last year, which found that 47% of institutional investors “view digital assets as having a place in their investment portfolios.”Related Reading: This Crypto Use Case Has Never Been as “Underrated” Due to Twitter and TrumpFeatured Image from Shutterstock Price Tags: xbtusd, btcusd, btcusd
Crypto Tidbits: Bitcoin Sees Immense Volatility,