Ethereum has been around since 2015. The technology was groundbreaking at the time of its launch. It enabled blockchain-based applications, such as DeFi and games.

Five years later, Ethereum’s tech looks inferior to competitors, most of which emerged during the 2017 ICO boom.

Low throughput significantly throttles the performance of Ethereum-based dApps. The project utilizes a secure but slow Proof-of-Work (PoW) consensus, which only allows 15 transactions per second (TPS) at best.

Meanwhile, other Layer 1 platforms like Polkadot and Solana can handle hundreds or even thousands of TPS because they run more efficient consensus algorithms like Proof-of-Stake (PoS).

PoW consensus requires nodes to run specific algorithms, committing their computing power to the network’s security. PoS, on the other hand, uses financial incentives to keep nodes from behaving maliciously.

Ethereum planned to transition from PoW to PoS for years, but it has been difficult from a technological standpoint. Moreover, as the network expanded and absorbed more value, the stakes grew higher. If the transition goes wrong and users lose money, Ethereum will lose much of its reputation.

Still, the team is working on moving Ethereum to PoS. It decided to separate PoW-based Ethereum 1.x from PoS-based Ethereum 2.0. The two blockchains will exist in parallel until a full transition from one to another is possible.

After years of development and weeks of running testnets, the date for launching Ethereum 2.0 was finally published. Along with it, the team revealed a staking contract, where node owners can deposit their funds.

PoS systems incentivize node owners to stake funds by offering them rewards. The opportunity of earning rewards in a leading cryptocurrency is appealing, so many users are interested in staking on Ethereum.

However, staking isn’t only locking ETH and getting rewarded. A node’s stake is essentially a bond, which the network takes away partially or in full if the node doesn’t contribute to the network’s security.

Running a node requires appropriate hardware, a stable and fast network connection, and an understanding of the software. In many ways, it resembles a full-time job.

On top of that, Ethereum has a minimum staking requirement of 32 ETH (around $17,000 at the time of writing), which may be high for some node owners. Meanwhile, users with enough ETH may not have enough time or knowledge to run a node.

The advantages of using Rocket Pool instead of staking natively are different for node operators and stakers.

Node operators can lower their barriers of entry and increase rewards. The protocol requires 16 ETH to run a node; the other half of the minimum stake comes from pooled users’ funds.

Sharing the minimum stake is beneficial both for small and large node operators. Node operators with 16 ETH get the opportunity to stake, while whales can spin up two times as many nodes as they could natively and enjoy a better return on their investments.

Like node operators, stakers get lower barriers of entry. On top of that, they can deposit more than 32 ETH, socialize losses with other stakers, and are freed from technical hassles.

Since users’ funds are pooled, stakers can start earning rewards on as little as 0.01 ETH, and there is no maximum deposit. Rocket Pool splits the pooled funds in chunks of 16 ETH and distributes them across node operators.

Spreading ETH among nodes provides better protection against slashing. If a node operator fails to meet Ethereum’s requirements, it will lose part or all of its stake. If a user stakes natively, they risk losing all of their funds due to slashing. Rocket Pool reduces potential losses because if a platform’s node is slashed, the entire pool of stakers shares the loss. 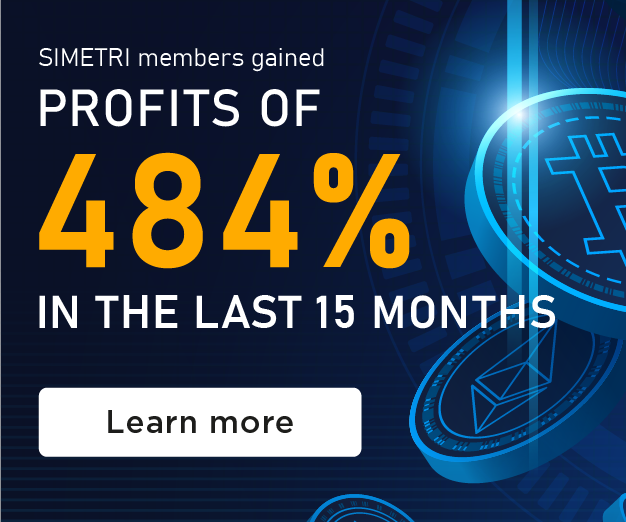 To better protect stakers, Rocket Pool provides additional incentives for node operators, which stake the protocol’s native RPL tokens. If a node’s 32 ETH stake is wiped, the RPL stake is burned to compensate for the loss.

PoS platforms generally have a handful of nodes with large stakes, which practically control the consensus and game the system to retain the control. Consequently, centralization concerns arise.

By allowing smaller players with limited resources to join Ethereum 2.0 consensus, Rocket Pool democratizes participation in the network and makes it more secure.

Finally, stakers enjoy the advantage of keeping access to their ETH through rETH ownership tokens. When a user deposits funds to a pool, they receive rETH, which grows in value over time as the rewards are accumulated. The earlier a user gets into the pool, the more rETH per one ETH they earn.

Despite the availability of staking, Etherum 2.0 is far from being fully functional.

Moreover, it doesn’t have a bridge to Ethereum 1.x yet, so users who stake natively lose access to their ETH potentially for years. Meanwhile, rETH holders will be able to liquidate their ownership tokens at any time.

How Does It Work

Rocket Pool’s smart contracts receive funds from users and distribute them across the network of Smart Nodes, which are essentially nodes connected to the platform.

When a user deposits ETH to the pool, a smart contract issues a corresponding amount of rETH. Further, it creates a batch of four ETH and sends it to one of the Smart Nodes.

If a node goes down, the smart contract stops depositing ETH to it.

Deposits to the pool have fixed terms, currently ranging from three months to one year.

Once a Smart Node gets a total of 16 ETH from Rocket Pool, the platform’s smart contracts automatically batch the node’s 16 ETH with the pool’s 16 ETH and creates a 32 ETH validator. 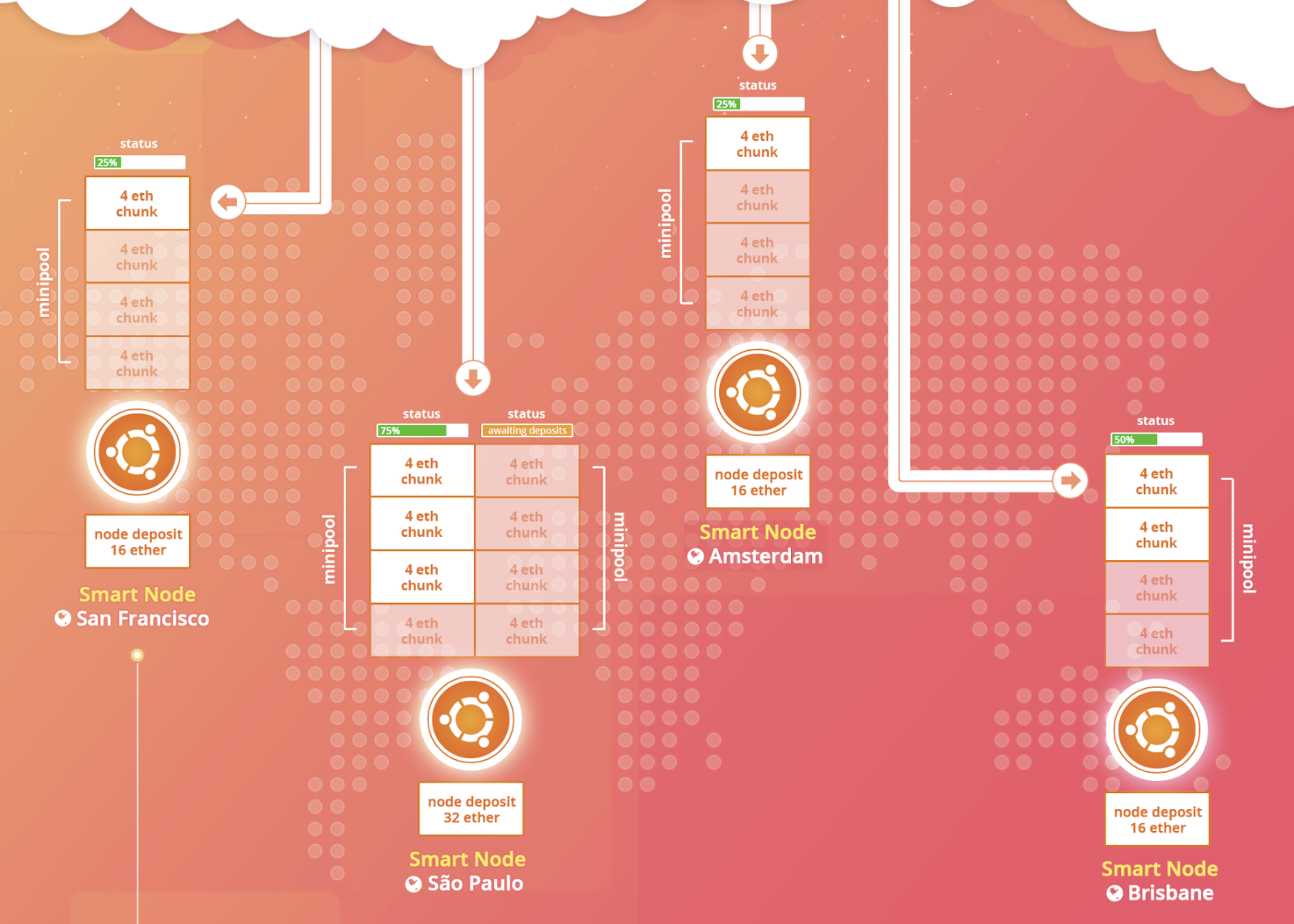 The nodes, which stake RPL tokens for extra insurance, get better chances to receive higher commissions.

Deposits, rewards, and commissions for Smart Nodes are represented by Rocket Pool’s nETH, which nodes receive if they stop participating in the system before smart contracts on Ethereum 2.0 are implemented.

Ethereum 2.0 won’t have smart contract capabilities until the so-called phase 2 segment is expected 2021-2022.

Once the network transitions to phase 2, users will be able to swap rETH and nETH for the regular ETH.

The Pros and Cons of Rocket Pool

Rocket Pool creates a base pillar for Ethereum 2.0 consensus. Transitioning to PoS consensus brings a new set of potential issues, including the centralization of consensus and insufficient security.

By making staking more accessible, easier, and more profitable than it can be done natively, Rocket Pool incentivizes more users to participate in Ethereum 2.0 consensus, therefore better securing the network.

Crypto organizations and institutions like Grayscale or Binance can act as proxies to Rocket Pool too. Doing so allows them to offer users extra returns on their idle ETH without setting up any staking infrastructure.

Still, while it’s encouraging that the team has vast experience working on the project since 2016, Rocket Pool adds smart contract risk to staking and running nodes. If a smart contract has a bug, it can lead to the loss of stakers’ funds.

Moreover, the platform is somewhat centralized because some of its Smart Nodes are trusted. Although the team plans to onboard users and organizations with a reputation at stake as trusted nodes, trusted elements create bottlenecks in decentralized setups.

Trust nodes will also be responsible for reporting data from Ethereum 2.0, effectively acting as an oracle. While it’s an understandable architecture decision, as Ethereum 2.0 doesn’t have smart contracts, it presents a risk of data manipulation.

Finally, Rocket Pool doesn’t have a backstop mechanism. RPL security bonding is not mandatory for the nodes. Consequently, if a major part of the pool’s nodes gets wiped by slashing, the system can become insolvent if not enough RPL were staked as insurance.

The platform is unique in that it’s focused on the decentralization of staking. There are numerous staking service providers like Bison Trails and Staked, but their operations are centralized, and they don’t onboard any external nodes.

One of Rocket Pool’s closest competitors is Stakewise. The platform provides cloud infrastructure, streamlining the experience of operating a node. However, unlike Rocket Pool, Stakewise requires the full 32 ETH deposit to be able to stake.

Both Rocket Pool and Stakewise provide deposit tokens, which represent ownership in staking pools. These tokens can be integrated into DeFi protocols, opening prospects for users to generate additional yield.

Whether one of the platforms will have an advantage over the other will depend on its token acceptance among DeFi platforms.

The number of users interested in staking ETH is substantial. For example, a corresponding subreddit has 6,800 users.

Meanwhile, the nodes’ commission is 20%, and the node utilization is 100%, which means that more users are willing to stake ETH than Smart Nodes available. Considering that the project gained 5,700 users on Twitter since 2017 and has 700 users in Discord, it’s likely that a handful of whales deposited large amounts of ETH to the pool.

The Future of Rocket Pool

One of the advantages of Rocket Pool is that it piggybacks on the success of the smart contract platform with the largest community in the space.

If Ethereum 2.0 pans out as expected, Rocket Pool can become a default staking-as-service platform, given its long history of development and early mover advantage.

Rocket Pool’s focus on decentralization, trustlessness, and neutrality will become a building block for centralized and decentralized services on Ethereum 2.0. By the time phase 2 is live, Rocket Pool’s solution will be battle-tested, so it will make more sense for teams to plug into it instead of spinning up staking infrastructures.

Retail investors looking to earn on ETH 2.0 may finally have a real opportunity thanks to yEarn Finance. If a recent proposal passes, the ETH 2.0 validator vaults would also…

The deposit contract for Ethereum’s 2.0 upgrade went live on Nov. 4, prompting devoted members of the community to send roughly 49,000 ETH in anticipation of staking. To meet the…

Being a successful trader is one of the most difficult pursuits that any person can undertake. The path to success is littered with countless examples of even those who are…

DeFi Project Spotlight: Stafi and The Rise of Liquid Staking

Stafi emerges alongside the growing excitement around staking protocols and the launch of Ethereum 2.0. To understand this staking service, it is first necessary to know how staking serves specific…

DeFi Project Spotlight: Curve Finance Officially Launches CRV Token
Ethereum's Buterin take on PoS vs PoW: from centralization to security
The Birth of Based Finance: Ampleforth to Build DeFi Degen Stack
How secure are CBDCs? From security to policy, here are the risks associated with CBDC issuance