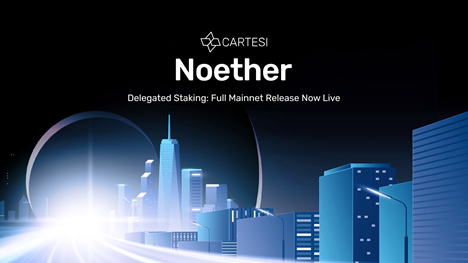 After months of intense development and beta testing Cartesi is proud to announce that Staking Delegation is live on mainnet.

Erick de Moura, CEO of Cartesi, says, “This is a fundamental turning point where Cartesi starts to become a more collective construction. Our community’s participation matters and makes us all stronger, from the CIP discussion about the fee structure, to the constant support and feedback from CTSI holders and node runners. We are thrilled to release Delegated Staking for everyone.”

The launch was carefully planned to ensure that Cartesi community members holding CTSI would be exposed to a minimum amount of risk throughout three test phases, including the last beta phase on mainnet. In total, three audits were conducted. One internal audit was done by our advisors and two by external companies including Certik (whose review can be found here) and ImmuneFi who will be launching a bug bounty program.

During the beta phase on Mainnet, Cartesi worked with three staking partners: Everstake, Blockscope and HashQuark, who created and managed pools, each limited to a maximum of 3.6M CTSI.

From Cartesi’s Mining Reserve Intermediate Wallet, 3,000,000 CTSI were staked for testing purposes, ensuring block production and accurate testing. To ensure fair block production as new pools slowly come in, the mine reserve tokens will now be gradually unstaked over the next few weeks. The Cartesi Foundation will continue covering all of the fees, ensuring no effect on the mine reserve’s supply. 600,000 CTSI is available to be accepted by each pool from the community. The pool managers chose the commission for their operation.

Welcome to a full entirely decentralized system on Mainnet

Now, any individual or organization can create and manage staking pools without any limit or cap imposed, in a safe and trusted environment that has been thoroughly tested and audited. For all new pools entering the system, the Cartesi Foundation will also help ensure fair block production by delegating its own tokens until the pools are competitive.

Full details about the staking and unstaking process can be found here.

Blockchain adoption is a niche. Only 0.1% of developers have explored blockchain because of its inconveniences. Developers worldwide deal with very restrictive environments and cannot code smart contracts with mainstream software. With an operating system like Linux, they could use existing software and tools to create blockchain applications.

Cartesi’s staking delegation on mainnnet is great news for CTSI holders, who can hold on to the Cartesi project token, but also support and help create a secure infrastructure for Noether. Cartesi is allowing developers to code scalable smart contracts with rich software tools and components they are used to. The project is a layer-2 solution that integrates Linux and standard programming environments into the blockchain. Combining a groundbreaking virtual machine, optimistic rollups and side-chains, Cartesi aims to revolutionize the way developers create blockchain applications.