Etheruem’s Muir Glacier hard fork activated at block 9,200,000 and introduced a code change, EIP 2384, in order to delay the ‘difficulty bomb’ for another 4,000,000 blocks. This was the third instance in two years where Ethereum developers called to push back the ‘difficulty bomb’ which was a part of the original Ethereum code to add to the network’s difficulty every 100,000 blocks. However, without a corresponding increase in hash rate, the block production times increased, crossing the average 13-14 seconds and degrading the PoW algorithm.

Below is Messari’s representation of the developers’ push back of the difficulty bomb.

Ethereum 2.0 is supposed to move from PoW to PoS, but will have to wait about two years from full deployment. According to Messari’s recent report, the removal of these artificial difficulty additions restored Ethereum block times to their intended range. This change also impacted other on-chain metrics, it added. 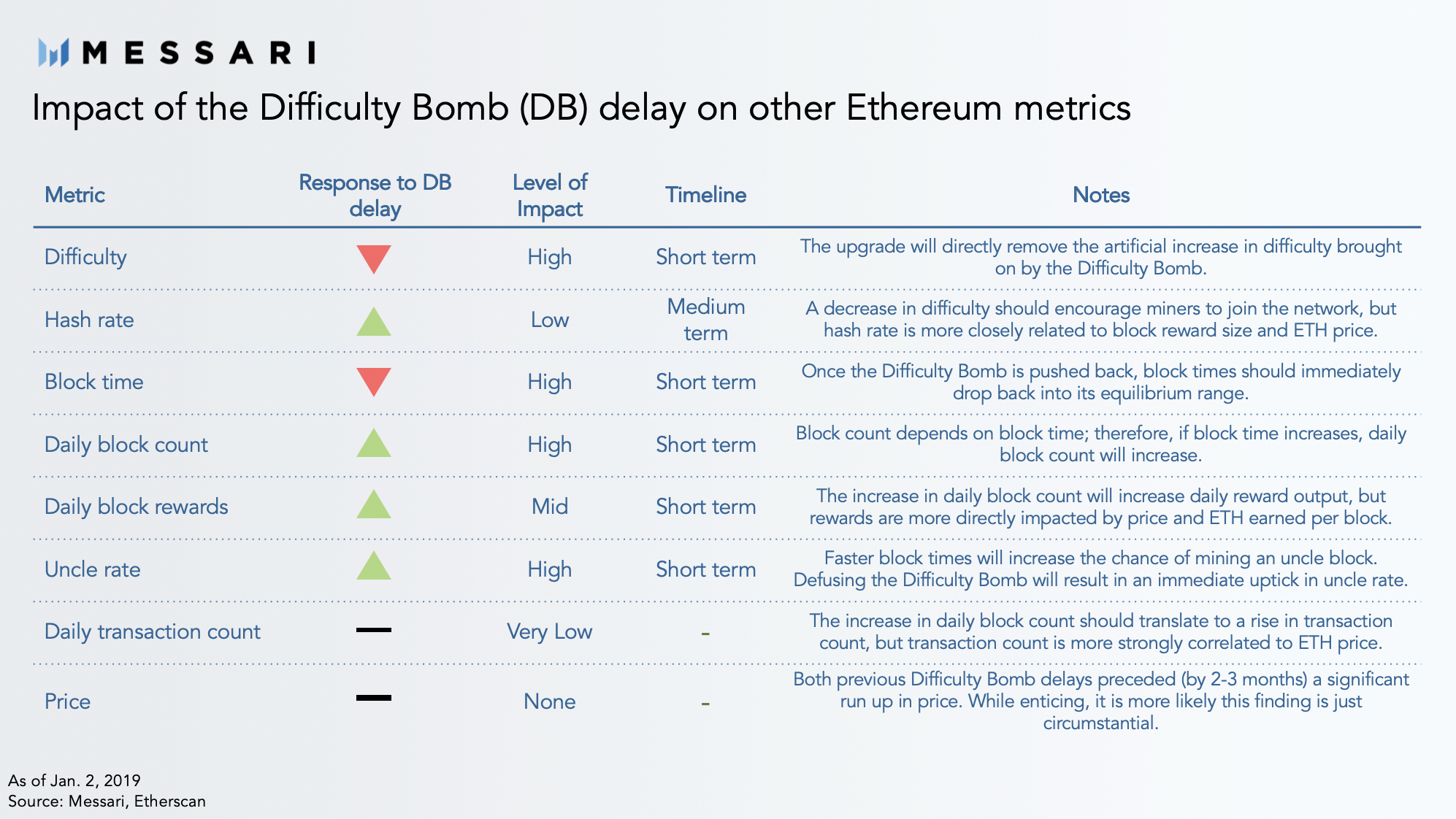 According to data collected by Etherscan, the average block time on the blockchain fell from 17.16 seconds to 12.96 seconds, which amounts to approximately 25%. This aided block production as well and as per Coin Metrics, it is falling short of just 2 blocks to register an ATH.

However, learning from previous peaks of the difficulty bomb, Messari’s report noted that the effects of the current push will be seen at least 12 months later. The report added,

“Last Feb., Ethereum developers estimated pushing the Difficulty Bomb back by 2,000,000 blocks (via the Constantinople/St. Petersburg upgrade) would delay any effects for at least 12 months, with some estimates ranging into mid-2020. Much to their surprise, its effects became noticeable within eight months.”

According to Eric Conner of EthHub, the next difficulty bomb might arrive sooner after Muir Glacier as when the Constantinople upgrade was implemented, the block times became faster. This early arrival of the bomb might lead to Ethereum developers considering yet another delay if ETH 2.0 is still under development. However,

“It is also possible the Difficulty Bomb’s purpose becomes obsolete as research into Ethereum 2.0 unveils new possibilities and development proposals. This scenario could already be the case as “Ethereum 2.0 is now being deployed as a separate blockchain” rather than a direct upgrade to the Ethereum 1.0 network.”

The developers might even fork out the Ice Age once the transition from Etheruem 1.0 to Etheruem 2.0 begins, a development that might also complicate the matter if the network plans to integrate Ethereum 1.0 as a shard within 2.0.

These Bitcoin Users Want DAI and DeFi – Here’s How They Plan to Get It
‘Tackling Real World Issues’: Hackers at ETH New York Build Apps Geared Towards Social Change
Santander Settles Both Sides of a $20 Million Bond Trade on Ethereum
Ethereum Smashes Resistance, Reasons Why ETH Could Rally 10%