The leading crypto-asset management firm, Grayscale Investments registered a total of $2.2 billion in Assets Under Management [AUM] on 10th January 2019.

“01/10/20 UPDATE: Net Assets Under Management, Holdings per Share, and Market Price per Share for our Investment Products. Total AUM: $2.2 billion”

According to the investment firm’s latest update, Grayscale Bitcoin Trust exhibited a decline of 0.26% despite a positive price action of its underlying cryptocurrency in the first week of 2020.  Additionally, GBTC held $2,062.9 million AUM with $7.66 holdings per share. 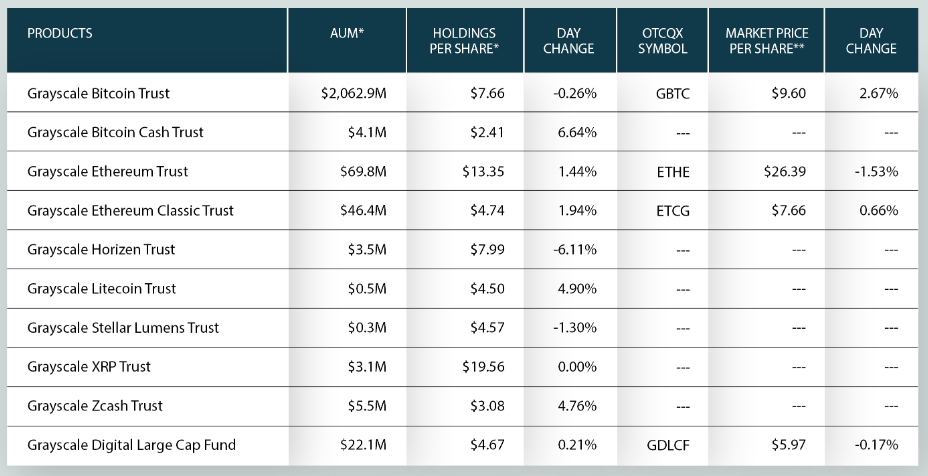 The digital currency asset manager had previously registered $2.3 billion in Assets Under Management [AUM] on 8th January, highest in this year. Following which it declined and held its mark at $2.2 billion AUM, on 9th and 10th January.

This coincided with Bitcoin’s price movement. According to CoinMarketCap’s data, BTC was trading near the $7,200-region on 1st January. Eight days later, the coin climbed to a year-high of $8,391 before sustaining a brief fall below $7,800 on 10th January. The price recovered and at press time, Bitcoin was trading at $8,162 with a market cap of $148 billion after a surge of 8.92% over the past week.

Interestingly, Grayscale Bitcoin Trust climbed to a year-high of $2,144.1 million AUM on 8th January before falling to $2,069.9 million AUM the very next day

Overall Grayscale Digital Large Cap Fund held $22.1 million AUM after recording a positive change of 0.21% and holdings per share of $4.57.

Ethereum held by exchanges grows by 5%; taking Bitcoin's space?
Ethereum network grows despite price struggles
How Ethereum Might Evolve Over the Next Year
ErisX partners with Etale to enhance trading experience for institutional investors