The fag end of 2019 saw a rise in the decentralized finance [DeFi] market. Bitcoin (BTC) was the first implementation of decentralized finance, with the second wave of DeFi including the Ethereum blockchain, a development that added another layer of programmability to its blockchain. Investors could now borrow, lend, trade, exchange, hedge, and store cryptographic assets in a trustless manner.

DeFi’s growth in 2019 was crucial to everyone expecting DeFi to do the same in 2020. 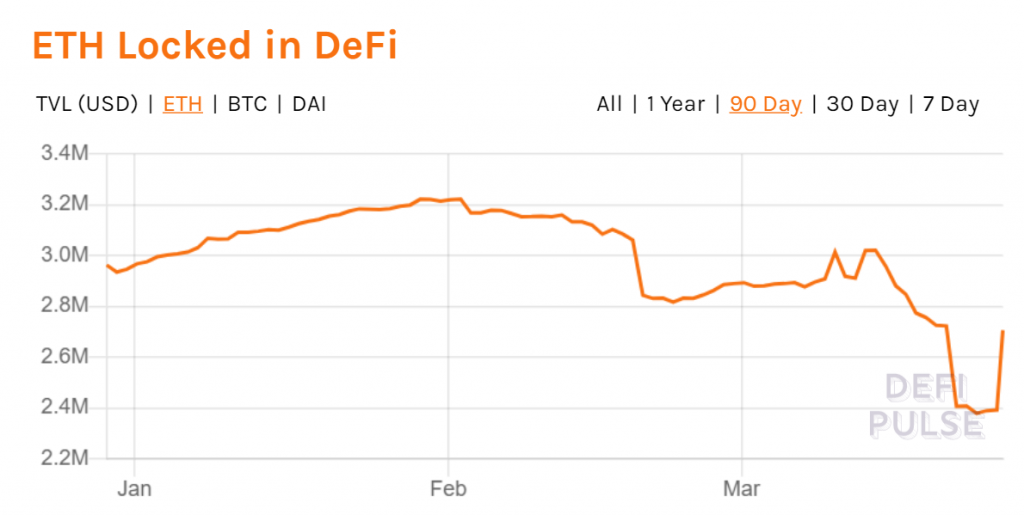 The figure soon fell, however, albeit gradually. Alas, this wasn’t to last as the figure recorded a very rapid decline after reaching $3.02M on 13 March. The total ETH locked in DeFi fell significantly to as low as $2.378M on 24 March. At press time, this figure had climbed a bit, resting at $2.75M.

Though Bitcoin was the first application on DeFi, Ethereum has taken over lately. The question arises – ‘Has Bitcoin lost the DeFi race?’ On a recent podcast, Kain Warwick, CEO of Synthetix, a crypto-backed synthetic asset platform, was of the opinion that Bitcoin was never in the DeFi race to begin with.

According to him, Ethereum, with its programmable money that can be kind of put into smart contracts and can be engineered, is very powerful.

Previously in February, the decentralized lending protocol bZx was exploited in a back-to-back “flash loan” attack, with the platform losing $954,000. This attack raised many doubts about the future of DeFi. Another question arises here – “What are the major risks that DeFi is facing at the moment? What is the way out?”

According to Warwick, DeFi is at a very early, experimental phase at the moment, hence, problems like these are a given. He added,

“How many ever audits you have, how many ever different people have reviewed the code, it’s almost impossible to say that there are no bugs in a system. I think one of the biggest risks is that as new systems are added, this additional complexity and surface area arises and it’s really hard to kind of reason about what the impacts are.”

These limitations lead us to the third question -“Just how decentralized is DeFi?”

Warwick is of the opinion that there are various aspects that have to be considered to tag any project as ‘decentralized,’ be it governance or upgrade process or anything. He asserted that DeFi had not reached the ‘completed’ phase as of yet.

Additionally, a recent Arcane report had also highlighted that DeFi applications are centralized to some extent. In fact, on the latest episode of the Epicenter podcast, Cassidy Daly, Token Designer at Centrifuge, also echoed a similar belief, stating that many DeFi projects failed to be truly decentralized.