Ethereum has been underperforming Bitcoin and many of its other peers over the past couple of months, with its sharp decline from yearly highs of $290 doing some damage to mid-term market structure.It now appears that Ethereum could be positioned to gain some ground against the rest of the market, as its technical outlook is growing increasingly bright as it begins flashing some subtle signs of strength.ETH is also strong from a fundamental perspective, as data shows that the number of Ethereum addresses with a non-zero balance has passed that of Bitcoin. This growth could be rooted in its growing utility stemming from DeFi initiatives.If the crypto continues seeing mounting strength on these two fronts, it could be in for some immensely bullish momentum in the months ahead.Ethereum Price Poised for Upside Despite Short-Term Signs of WeaknessEthereum is currently teetering just above its key support at $200, with the decline seen by Bitcoin and other altcoins today placing some pressure on ETH.At the time of writing, Ethereum is trading down just under 2% at its current price of $201. This marks a notable decline from recent highs of $210 that were set this past weekend.This present weakness may be short-lived, however, as analysts are noting that the support at $200 could be enough to boost the crypto higher in the days and weeks ahead.One crypto trader on Twitter recently offered a chart detailing where he anticipates it to trend in the near-term, marking an upside target at roughly $216. 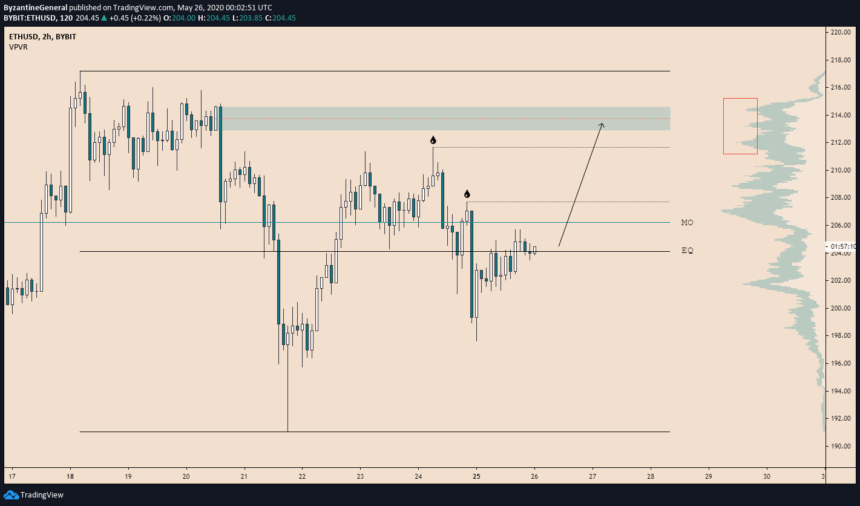 Image Courtesy of Byzantine GeneralJosh Olszewicz – another respected analyst – recently cautioned that investors should “watch out” when the crypto’s cloud formation finally flips into bull’s favor.“1D ETH: when this finally flips bull, watch out,” he stated while pointing to the chart seen below.

Image Courtesy of Josh OlszewiczAlthough this would be an overtly bullish sign, it does appear that the last time this occurred in March the crypto saw a sharp selloff. As such, this could actually be a counter indicator that suggests it is poised to see downside.ETH’s Fundamental Strength Continue BuildingRegardless of slightly mixed sentiments amongst technical analysts, the cryptocurrency does appear to be in a good position to see growth stemming from its fundamental strength.Camila Russo, a writer and popular crypto commentator, spoke about the rise of Ethereum addresses with a non-zero balance in a recent tweet, explaining that they have now surpassed that of Bitcoin.“Ethereum addresses with non-zero ETH balances have also continued to shoot past Bitcoin addresses holding BTC, after overtaking them last year. This coincides with the rise of DeFi,” she explained while referencing the below chart from Glassnode. 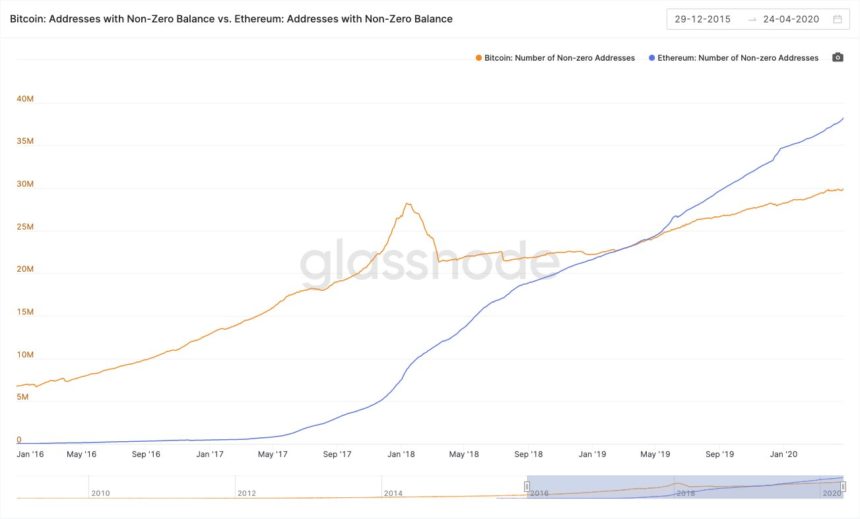 Data via GlassnodeThis fundamental growth does make a strong case for the crypto’s mid-term outlook, suggesting that its future still remains bright despite its recent lackluster price action.Featured image from Shutterstock.

Sparkpool to Freeze Mysterious 2,100 Ether Mining Payout for Now
$750: The Ether Price Freight Train Has a New Target
Scam or Be Scammed? Ponzi Games Are Breaking Out on Ethereum
A Strong Uptrend Forming For Ethereum, Here Are Key Bullish Targets