Tether has been trying to climb up the CoinMarketCap ladder for quite some time now, and it recently became the third-largest cryptocurrency measured by market cap, after surpassing XRP on the charts.

As Tether’s supply reaches new heights, it seems to be moving away from the native Bitcoin chain, something that was pointed out by the latest Arcane research report. For context, Tether was initially based on the Omni-protocol on the Bitcoin blockchain, before gradually opening up on more protocols. Ethereum, Tron, and EOS have been utilized, and in the last year, these networks have acquired significant shares of Tether’s transaction activity. 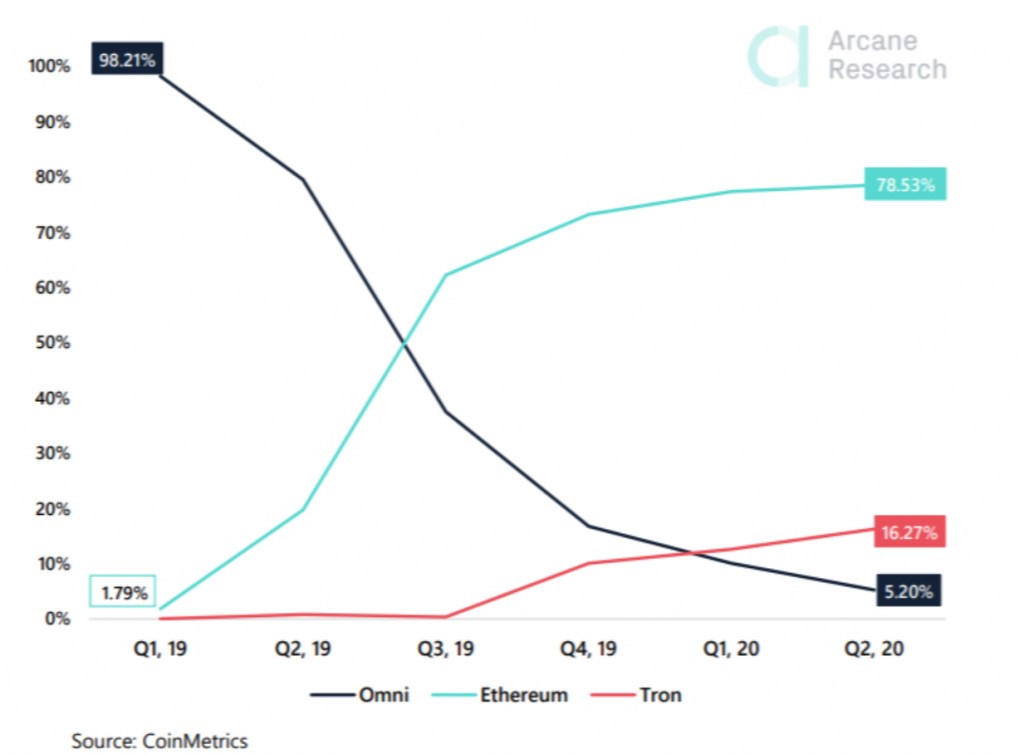 If looked at it, the transition to the Ethereum protocol was driven by Ethereum’s faster confirmation times, faster exchanges withdrawal- deposit times, and lower fees compared to the Omni-layer.

Commenting on the same, Anthony Sassano, founder of Ethereum intelligence firm EthHub, had noted that Ethereum is a much better payment rail for Tether and other stablecoins. Paolo Ardoino, CTO at Tether, had also noted that the transaction fees and confirmation times were the primary reasons that pushed Tether to migrate and that they had to give traders what they were asking for.

While the community is witnessing so many developments, it becomes important to also look at the effects and changes they could bring about. Ethereum presently holds the lion’s share of Tether’s supply and this is a known fact. While this is positive for Ethereum demonstrating its value as an infrastructure, it is also driving up fees on ETH and pushing out other applications. In fact, if this continues, USDT could end up replacing Ether as a payment instrument in the Ethereum ecosystem.

In conclusion, the migration from Bitcoin’s blockchain could have been due to the aforementioned reasons, but considering the current rapid developments, the same issues might occur in Ethereum moving forward and Tether could end up migrating to a different chain again.

TA: Ethereum Struggles Below $1,350, Why 100 SMA Could Trigger Rally
From Lending to Synthetic Assets: How DeFi Can Change in 2020
Ethereum not very interoperable with legacy systems: Cardano's Hoskinson
Ethereum's advanced improvement proposals might put Bitcoin's dominance at risk