Ethereum: Will the increasing growth of crypto-fiat help or hurt the ecosystem?

Ethereum’s network has seen a significant increase in the issuance of stablecoins in recent times. CoinMetrics had indicated that the 7-day moving average of the total number of confirmed transactions on Ethereum’s blockchain as of April 30 rose to 845,400, the highest since July 1, 2019.

The fact that Tether (USDT), trueUSD (TUSD), Paxos Standard (PAX), Binance USD (BUSD), USD coin (USDC), and even MakerDAO’s DAI are all based on Ethereum’s blockchain is an interesting factor contributing to this flip in the number of native ether transactions. As a result, crypto-fiat on Ethereum now accounts for just over $7b, compared to Ether’s market cap of about $24b.

Nic Carter, the founder of CoinMetrics, however, seems to be of a different opinion. He commented on this growth of Ethereum stablecoins and what this means for the value of ETH, Carter in a recent post stated,

“I see no reason to believe that this would be the case. However, if non-native tokens outpaced the native unit by a factor of say, 5, that might be cause for concern. I expect that top-heaviness will be a long-term feature of virtually all token-bearing blockchains.” 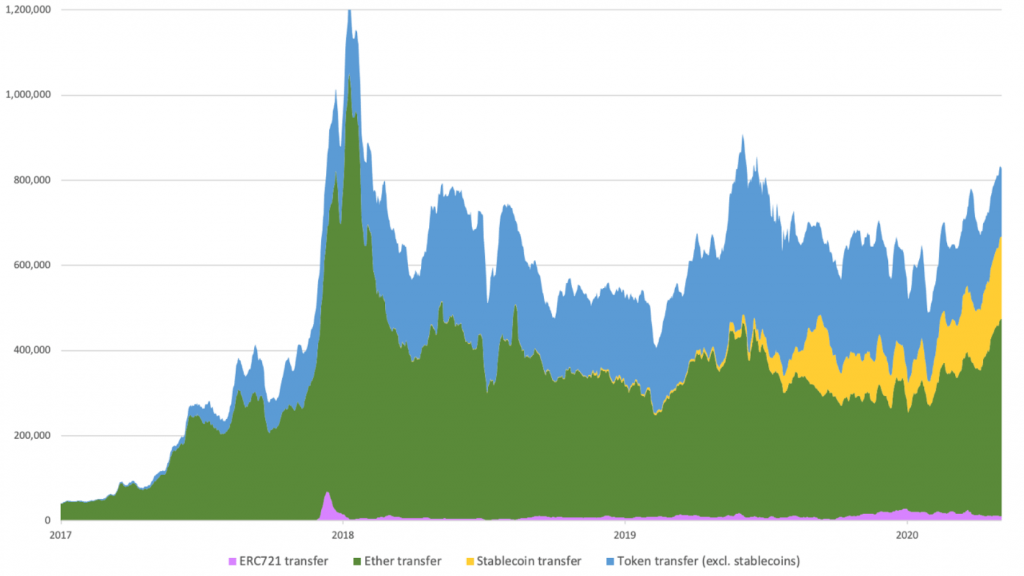 It can be deduced from the chart that stablecoins are satisfying a large amount of transactional value with a relatively small monetary base. So the question here is ‘Does the growth of crypto-fiat help or hurt the Ethereum system? Commenting on this, Carter further stated,

“The most compelling arguments for Ether’s long term value, in my view, boil down to Ether as a necessary asset for fees, and Ethereum’s ability to keep Ether valuable is similar capacity to that of the US and the dollar. The task is to cultivate an environment where it’s generally a good idea to hold and use ETH.”